It was my hubby's birthday on 29th March and I wanted to plan something special for him. It was a weekday and my husband didn't really want to celebrate it. The reason being he is getting older, he don't want our friends to know about it and all was just an excuse. I knew he didn't want to put me to work the whole day with two little one's as he know they trouble me a lot when I'm in the kitchen. So the plan for the day was to go out for dinner once he is back from work and my son was happy to hear that.
Still my mind was wandering to do something for him on his special day as he is the person who tries to make our family everyday a happy one. So I planned to bake a simple chocolate cake for him just as a surprise. I had some red roses in my flower vase and some left over candles. I already had a birthday greetings bought at new year time from a dollar store as I got 2 cards for $1 and I used one to wish my hubby on new year(I believe spending reasonable on good times teaches you spend better on bad times). We were very happy with the result. These simple things at home made our day. So here comes the recipe for a Chocolate layered cake with Chocolate Frosting. 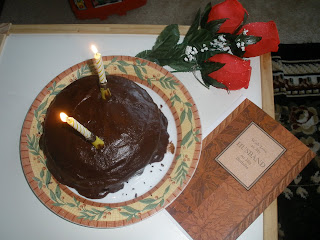 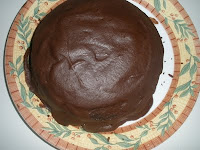 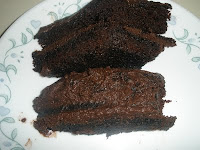 I'm an early morning person as my hubby leaves for office at around 6 in the morning. I pack him breakfast and lunch in my half sleep every morning. So there are some days in those mornings, I will be in deep sleep and wake up late in a shock thinking what to pack for his lunch. So on one of these morning I was just browsing my fridge in my lost sleep and noticed I have some left over rice from the day before and thought of preparing Jeera rice. I just made the seasoning with Jeera and other spices and added rice to it and made quick Jeera rice. At noon my husband calls me and asks me 'what kind of rice is this? '. I was bit nervous about my ezee-lazy preparation in the morning but says calmly 'it is Jeera rice, why? you didn't like it'. And then he says,'no,it is good. just that when I microwaved, it smelled so good, my colleagues were asking me what did you get for lunch'. I must say I was so much relieved of his answer and then I started making it more often since I noticed my kids also loved it. So here is my version of Jeera rice. Enjoy the taste of effortless cooking :) 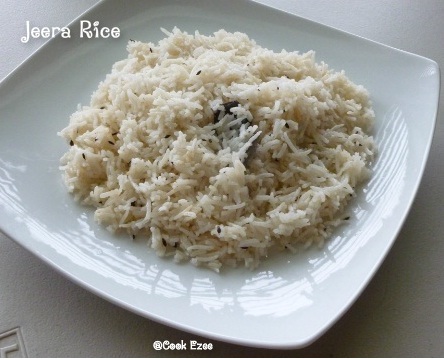 Wash and drain the rice. Heat up a pan, keep in medium heat and pour oil into it, add jeera and bay laves and saute till jeera crackles. Add curry leaves, water and salt and bring to boil. Add Rice and stir well till the bottom of the pan. Once the rice and water start to boil reduce to med flame, close the lid and let it cook. Switch off when the water is fully absorbed and rice becomes soft. Serve warm with raita/chutney/pickle or any curry of your choice

Note:-
1) You can make it with left over rice as well and it tastes good too, I prefer par-boiled rice over basmathi rice if I use leftover rice.
2) You can add more whole spices like cinnamon stick, cloves and cardamon along with bay leaves for flavorful rice.
This is one of the most flavorful rice that can be eaten with any veg/non-veg dishes or even simply with yogurt and any kind of pickle.
Posted by PrathibhaSreejith at 5/15/2011 01:39:00 AM No comments: Links to this post 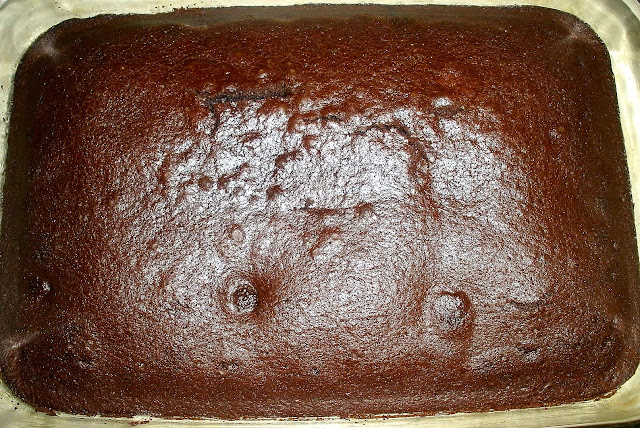 1)  Put Instant coffee powder and sugar in a mixing bowl and add the boiled water and stir well till everything dissolves in water.

2) In another bowl microwave butter and dark chocolate, take this out and stir well and check if both are melted well

3) Now add the coffee-sugar mix to the chocolate mix and stir well and wait for this to cool, keep stirring till this get cool.

4) Sift together flour, cocoa powder and soda and add it to the wet mix and stir well so that no lumps are formed.

5) Beat in eggs one by one and keep mixing each time you add the egg.

6) Grease a cake pan and pour this mix into and bake for 30-45 mins in 350 degree F or till a tooth pick inserted in the middle of the cake comes out clean.

7) You can serve it as it is or with a scoop of vanilla ice cream as a dessert..

Kheema with Soya Granules and veggies 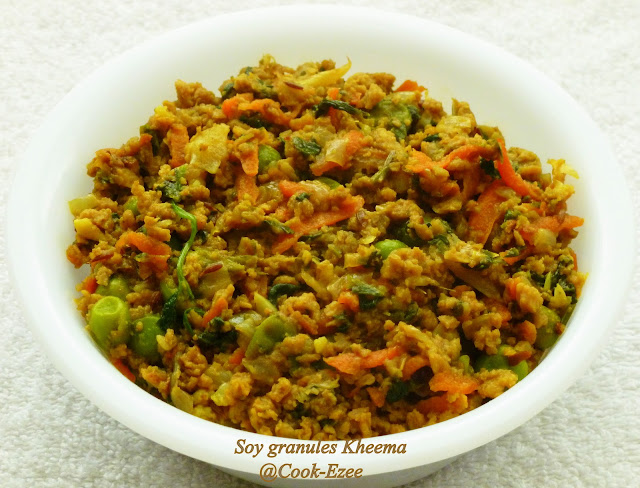 Soybean chunks and soy granules were not in my favorite list till I discovered some of the masala versions of it. I remember the taste of  Soy chunks in veg-biriyani which we used to have in our childhood, it resembled a lot like mutton/goat. I tried making soybean biriyani once but it didn't turn out that great as I expected and I was a bit disappointed.

On a Friday evening we had a guest and I made soy granules cutlet to be served with tea since it was ezee to prepare just the way it was mentioned in the Nutrela pack. We were enjoying the hot masala tea with cutlet on that cold winter eve and I was talking to this friend of mine. As usual we had many topics to discuss and finally I told her about my soy biriyani experience. She was from Mumbai and she told me the kind of soy recipes her mom use to make especially with the soy granules, veggies and garam masala powder where no body could really figure out it was soy granules. That idea of soya cooking striked my mind and I thought of giving it a try. I named it Soya Kheema because it looks like mutton/chicken kheema when prepared. We really started admiring the taste of Soybean from then. Thanks a lot to my dear friend Shifali for suggesting me an awesome soya cooking. So here comes my recipe of Soya Granules- Veggies Kheema. 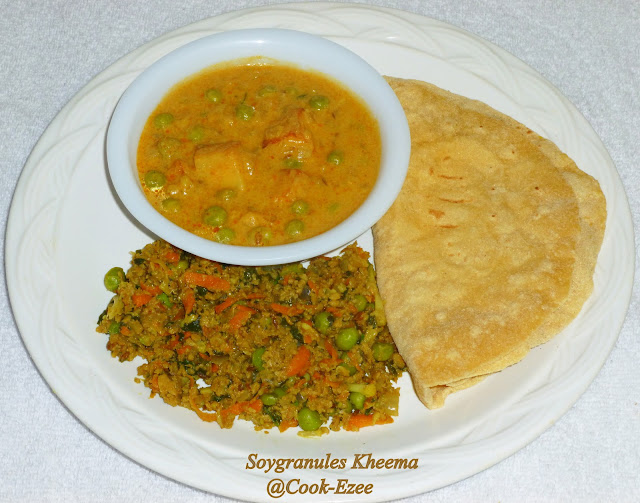 Heat up a kadai/frying pan, pour oil, add Cumin/Jeera and stir for a minute till they crackle.
Add minced ginger-garlic and saute for a minute, add green chilly, few curry leaves, onion, salt and saute well till onion turns translucent.
Add all the masala and stir for a while in medium heat. Add in veggies, 2 tbsp coriander leaves and saute till veggies get mixed well with masalas.
Close the pan with a lid and let cook for five minutes in low-med heat till veggies is almost cooked.
Add soya granules at the end(soya will be already cooked when you put it in boiled water) and stir it well to mix with masalas and veggies.
Cook it covered for another five minutes so that masala is evenly spread over soy granules and veggies.  Switch off the stove. Garnish with rest of the chopped coriander leaves and serve it hot with Roti/Naan/Rice.. 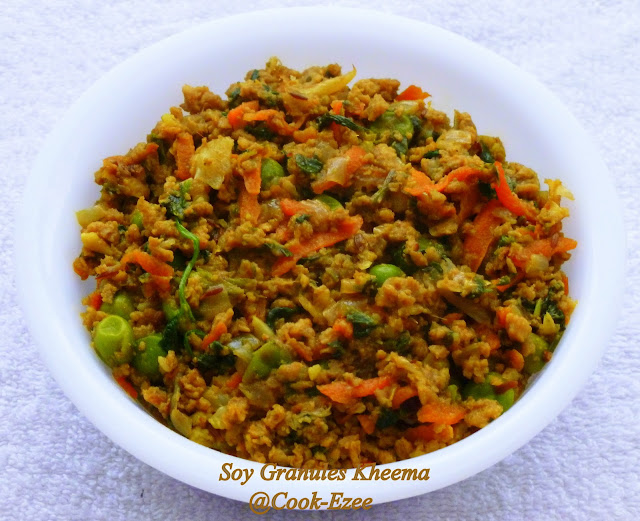 Nutritional Info:- Soya beans is a good nutritional food for kids and adults. It contains more proteins than milk, egg, wheat and meat. It is low fat, low cholesterol and high protein food. It is a good alternative for mutton/chicken and red meat.
Posted by PrathibhaSreejith at 5/14/2011 01:54:00 PM 5 comments: Links to this post

Copyright © 2020. All rights reserved ® unless noted otherwise. The Contents and Images on this blog belong to Cook-Ezee.blogspot.com and may not be duplicated or published without author's written permission. Copying or posting of any of the recipes and pictures without written permission on any other page/blog or article is strictly prohibited and will turn to plagiarism. Copyright © 2020 Cook-Ezee. All rights Reserved.

PROUD PARTICIPANT AND MEMBER OF

COME JOIN THE GROUP AND HAVE FUN BAKING 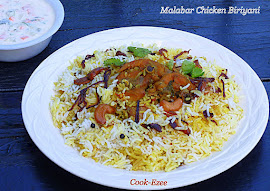 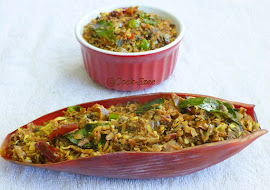 PrathibhaSreejith
Maryland, United States
A person who loves to lead a simple life, who some times laugh too much on silly things and beleives life comes with no guarantees. I'm a dedicated mother of two, a devoted wife, a darling daughter, a dear sister and a loving friend. As every human I would love to dance in the pouring rain, wake up seeing the beautiful sunrise but I rather beleive the best things in life are: Breath in your nostrils, light in your eyes, flowers at your feet, duties at your hand, the path of right just before you. Then do not grasp at the stars, but do life's plain, common work as it comes, certain that daily duties and daily bread are the sweetest things in life.
For Any Queries please contact Cook-Ezee at cookezee@gmail.com